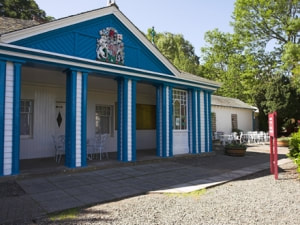 St. Ronan’s Wells is an attractive pavilion situated on the hillside overlooking the Leithen valley. Originally constructed by the Earl of Traquair in the 1820s to provide a comfortable retreat for visitors to the spa, it was largely rebuilt and extended in 1896 to accommodate indoor bathing facilities and a bottling plant. The spa was frequented by Sir Walter Scott as a boy and to this day hundreds of visitors come each year to sample the spring water which is still “on tap” at St. Ronan’s Wells. A browse round the interpretative centre will reveal its long and interesting history in some detail. A well, several underground tanks, an ornamental pond and a herb garden can be seen in the grounds behind the pavilion. Parking, access and facilities for the disabled are provided.

St. Ronan's Wells Support Group
St. Ronan's Wells is a vital part of the heritage of Innerleithen. Many of the town's traditions derive from its existence and its historical and amenity value to residents and visitors alike cannot be overstated. The former spa was sold for a nominal fee in 1966 to Innerleithen Town Council and today Scottish Borders Council is responsible for its maintenance. It functions primarily as a visitor centre managed by the curator and staff of Tweeddale Museums and is an important venue for part of the annual Cleikum Ceremonies.

Formed in June 2003, St. Ronan’s Wells Support Group comprises Innerleithen folk with an interest in both the history and the future of St. Ronan’s Wells. While it is the duty of SBC to look after the Wells, it was felt that, because of the number of properties in their care coupled with financial and time restraints, development and improvement of the facility was likely to proceed slowly, if at all. An independent locally based volunteer body would, however, be able to raise funds from charitable sources for improvements to the Wells and provide a better amenity both for visitors and the people of the community.
Since its inception, the Wells Group has run small fund raising events and has been the recipient of two grants from Awards for All. The first allowed a feasibility study to be carried out on how best to develop the Wells as a visitor attraction and a facility for the community. The second grant was used to make accurate costings for some of the proposals, providing an essential document required when applying for capital spending on the Wells. In 2007 the Group worked in conjunction with Museum staff to entice the Beechgrove Garden to give the garden a highly successful makeover, and Group members also continued to work in the garden through the wet summer of 2008.

As Council purse strings continue to tighten the ability of the Wells Group to raise additional funding will assume an increasing importance. While the Group will continue to work for the good of St. Ronan’s Wells, the addition of new members would greatly help to ease the burden. An infusion of new blood would boost morale and lend St. Ronan’s Wells Support Group greater authority in its dealings with Scottish Borders Council and funding bodies. Contact with the Group can be made using the email address innerleithen@hotmail.com This e-mail address is being protected from spambots. You need JavaScript enabled to view it or through the secretary Dorothy Douglas on 01896 831509 for further information.
​
Make Sure Your Heritage Has A Future - Join Now!
BBC Beechgrove team visited Wells to plan the filming in July 2007 and met with members of the support group
Photographs courtesy of Graham Riddell Photography